Is it our duty to wear lipstick?

'How much does a tube of lip-stick cost in the supermarket?  I do believe, that being well-groomed and neatly dressed (and that doesn't necessarily mean, "expensively dressed" ), especially when attending Church-related activities, are part of good Christian witness in the community.' - the surprising word's of an older man, whom I greatly admire.
As I continue to ponder how simplicity might influence my appearance these words stunned me, and yet I think I may have almost agreed with this statement once. I don't believe I wore make up as a 'good Christian witness' but I was never one to leave the house without it on, and my clothes, shoes and jewellery were all chosen with care. The difference now for me, is that my definition of what constitutes 'well-groomed' has changed, and I find I am now more accepting of the appearance of others, perhaps as I better accept myself. (It also probably helps that my husband is very pleased to see me looking more natural and confident - much to my relief.) Where once I may have judged another woman with no make up I now admire her choice to allow herself to be just as God made her. And I have noticed something that I don't think I saw before - her face frequently looks fresh, sometimes even younger and perhaps more honest. It just isn't the case that all women who are not wearing make up have 'let themselves go'.


Author Penelope Wilcock in her blog - Kindred of the Quiet Way, tells of a discussion that followed her session on Plain dressing at a retreat. She was told that 'they (unlike the Plain dressing people) took great care over their appearance and felt a responsibility to society to do so.' What is that about? Is someone who dresses more plainly or simply less neat or clean or presentable? Do they contribute less to society? Of course not.
Surely makeup and clothes are not the most important feature of a woman. What Penelope goes on to say is that 'what makes us feel good is being loved, being liked - friendship and affection and acceptance',  and that 'a kind face, a ready smile and a joyous heart are always beautiful'.

'The Grace Effect', by Larry Alex Taunton - a book review (you could win the review copy)

A long time ago, in the dim dark past, I used to write book reviews for the Christian Woman magazine. I have always relished a free book, and the opportunity to share new books with others thrills me. (I guess that could describe what I like most about my work at the library.) Some I love, others are just so so, and well others I have struggled to get through, but most books have something about them that is worth discussing.

Happily one day while surfing the net I stumbled upon Booksneeze.com. I signed up. Before I knew it I had chosen a book and it was on its way from the US to country Western Australia. Once again I was writing reviews. Yay!

Here is Book Review One:

An apologist and Christopher Hitchens deep in discussion in a restaurant, way past midnight.
A family flies to the Ukraine to finalise the adoption of an orphaned girl.
This is 'The Grace Effect: how the power of one life can reverse the corruption of unbelief' by Larry Alex Taunton (Thomas Nelson, 2011).

The blurb on the back of the book says "Simply defined, the 'grace effect' is an observable phenomenon - that life is demonstrably better where authentic Christianity flourishes". I wanted Taunton, Christian apologist,  to persuade me that this is the case, but instead I couldn't get past my frustration with his arguments, and annoyance at his insistence that it is only Christian organisations that make a difference. I support Medicine Sans Frontiers, Amnesty International, and Women to Women International (none of these are affiliated with a religion) and I kept thinking -what of these organisations? Does the world not breathe a little easier because of what they do? I personally know of a young mother in the Congo who would say her life is better for their work.

What I did like, however, was the story that drew me to this book - of how Taunton and his family adopt an Ukrainian orphan. I was once involved with a Christian (yes Christian) organisation that sent aid to orphans in the Ukraine - victims of the Chernobyl disaster, so it felt personal to me. Sasha's feisty nature is so appealing and I found myself wanting everything to work out so that she could live happily ever after with new mum, dad and brothers. (Though is it a sign of success that 'she has forgotten most of her Russian and instead chatters away in an easy if  heavily accented English' ?  p221) I loved the photos of Sasha at her brother's wedding. What joy.

I was disappointed that I felt so critical of ' The Grace Effect'. No one would doubt Taunton's love for his adopted daughter or of his commitment to Christ, but I was not comfortable with this story of love mixed in with an apologist's argument. I just wanted to read about Sasha. Sadly I was relieved to finish it. I'm giving it a 2 out of 5.  Judging by other reviews, not everyone will feel the same way as me.

If you live locally and would like to win the review copy be the first to leave a comment. I would love to discuss it with you over a cuppa in the library.

Disclosure of Material Connection: I received this book free from the publisher through the BookSneeze®.com <http://BookSneeze®.com> book review bloggers program. I was not required to write a positive review. The opinions I have expressed are my own. I am disclosing this in accordance with the Federal Trade Commission’s 16 CFR, Part 255 <http://www.access.gpo.gov/nara/cfr/waisidx_03/16cfr255_03.html> : “Guides Concerning the Use of Endorsements and Testimonials in Advertising.”
Posted by Asta Lander at 1:05 AM 3 comments:

The impulse to impress.

I am slowly working through Jan L Richardson's retreat for Women's Christmas - what an awesome concept, what a lovely journey. (http://sanctuaryofwomen.com/womenschristmasretreat2012.html)

Jan writes of an artist-in-residence at a gathering of clergy. This woman is a potter and caught Jan's attention because, as she watched her and listened to her, it became obvious that they were 'encountering a woman whose life and creative work had worn away the impulse to impress, to prove, to convince. In her years of working with clay, the clay had also worked on her.' Jan goes on to write, 'Shed of pretense the potter held out to us what she had to give. It was more than sufficient.'  She held out a small piece of pottery cupped in her hand, like a humble offering.

This made me think about what I have to offer from deep down within me. If I drop my need to please, to manipulate, to hide behind my appearance what will be left if it is simply me that stands there with my hands cupped and held out in front of me? Is simply being me sufficient?

Quite sometime ago I stopped hiding behind my hair when I cut almost all of it off and stopped colouring it. More  recently I stopped wearing make up, and I am still finding this a little difficult at times, but mostly I feel freer. Everyday I wonder what I am to do with my clothing. As I journey along on The Simple Living Challenge perhaps the biggest challenge will be to learn how to be me - simply Asta and to know that I am enough.
Posted by Asta Lander at 7:40 PM 2 comments:

Today I launched my first Facebook page to coincide with Day One of my new 'The Simple Living Challenge'. In the Info section I wrote as an explanation: The author Gretchen Ruben took 'happiness' and made it her project ('The Happiness Project"). I am taking 'simple living' and making it mine. As Gretchen explored her thoughts on happiness others joined the journey. Each month I will post the challenge I am setting for myself - and it is my hope that, like Gretchen, I will have companions on the way.
For a very long time I have been exploring what simplicity means for me. I have notebook after notebook filled with ideas and books galore on the subject, but I feel a strong call now to do more than write or read about it. Now I need to take action. And in fact I have been.
So this is the plan. Each month I will set myself a challenge - really what I will be doing is a lot of pondering... and I am hoping that this will lead to action. During this time I will write about how the challenge is going and invite comments. What I would like most is for others to share what has worked for them or what has not - to have a friend or two (or more) to walk along with me. The simple way is not new. Christ, St Francis and Thoreau (amongst others) are my inspiration.
Now to get me started I'd really appreciate some ideas. I need at least one challenge a month. I know what I will do for November (that is Buy Nothing New month) but how about the rest of the year? January would be as good as any place to start.
Will you join me on this adventure? It could change our lives.
Asta x 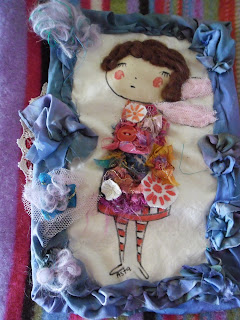